Skip to content
The Afloat Magazine review by Kevin Green

Interviews and Photographs by Andrew Wilson, with chapter text by Di Pearson

First published and reviewed by Kevin Green of Afloat Magazine

A photo paints a thousand words, but only if done well as photographer Andrew Wilson has clearly managed in this extensive photo essay of the Sydney to Hobart yacht race. Combining this with words from one of the longest standing yachting journalists on the Australian racing scene, Di Pearson, has elevated this to more than a mere coffee table book. However, its beautiful presentation and size, would make an ideal coffee table reference tome. Inside its 500 pages can be seen the trials and tribulations of thousands of sailors who have participated since the race inception in 1945. Bowman recounting what life is like at the pointy end of a super maxi, navigators, helmsmen, crew, along with proud owners recounting come-from-behind wins and the anguish of disaster; all recorded in images and text.

Di Pearson’s encyclopaedic knowledge and familiarity with so many sailors has given her interviews so much depth and will make fascinating reading even for non-sailors. For example, asking meteorologist Roger Badham about who was responsible for the 1998 Hobart disaster when six died takes tact. I arrived in Sydney the year after this disaster and would go on to be involved in this race as both yachting journalist and as a competitor which is a privilege I never forget, given the 1998 disaster which had followed on from our own British racing disaster in the 1979 Fastnet Race.

The Sea Safety and Survival Course training benefited us all after 1998. Learning from that terrible loss of lives is something that this book also delves into among its interviews. So the incredible story of the handicap winner of that 1998 race, Ed Psaltis on his yacht Midnight Rambler, recounts the seamanship that dictated how they pushed on through the 60-80 foot waves, rather than run with them back to mainland Australia as so many did who perished. A pity the line honours winner wasn’t interviewed, software tycoon Larry Ellison on Sayonara. He was so shocked and horrified by the conditions that he vowed to never return to do the race.

Unsung heroes are also given much needed space in this book, such as the AMSA and the radio relay vessel that most watchers aren’t aware of. The radio vessel moves down the coast ahead of the fleet to send messages and receive them as the yachts head out to the edge of Bass Strait. Some say modern technology has lessened their role but for most sailors it is comforting to have a stand-by vessel nearby who can receive emergency calls on VHF and even rescue a yacht.

Sydney of course loves the big end of town, and so it is on the water where the advent of the super maxis in 2002 heralded a whole new glamorous era and put the race firmly on the global map. Since then up to seven 100-foot super maxis have jostled at the start line. Being on board Wild Oats XI for her first race, the Big Boat Challenge in 2005, was a memorable day for me. Watching skipper Marc “Ricko’ Richards wrestling with the canting keel controls as he pushed hard against sister ship Alfa Romeo as we rounded the top mark was incredible, but for the run back towards the Opera House we were struggling yet still ahead, until Alfa unfurled her enormous Code 0 and steamed past us. Standing beside me was an indignant owner Bob Oatley who for once lost his calm demeanour and barked: “Where the hell is OUR Code 0?”. Sadly, Bob passed away in 2016.

Appropriately the book includes a look towards the future and the race’s development. With the demise of the super maxis, with several going to Europe, only two will start this year. So, us media types hope that Channel 7 will give the Corinthians some screen time. Among them is the new double-handed division that includes talented women sailors and brings this iconic bluewater race in line with others across the globe.

Blue Water Classics is self-published by the author and is available in all major book shops.

Order online at: bluewaterclassics.com.au or through your local book shop. 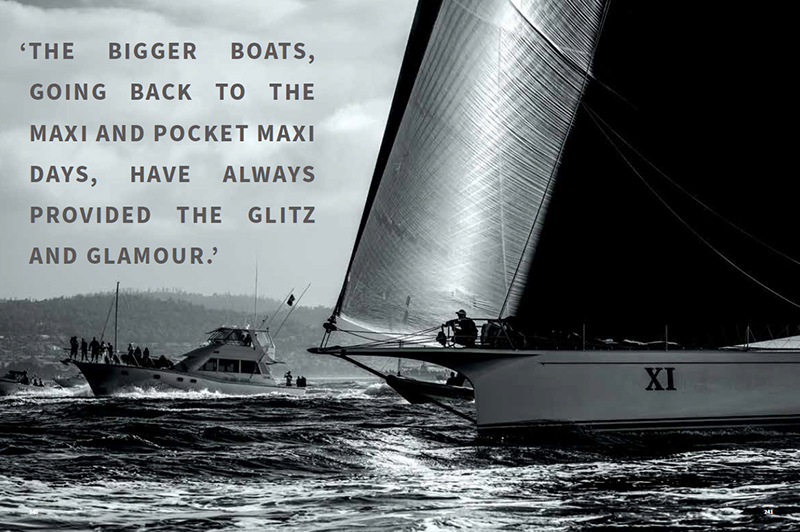